EVEN SO
presented as part of a Performance Art Night
Notsuoh
314 Main St
Houston, TX

I'm going to state up front that this durational performance that I'm documenting here tonight was not as strong as I would have liked it to have been in execution. Conceptually, however, it's one I may want to revisit at some point.

The above is me during the performance. I'm the black shape in the foreground. I'm shrouded in yards of black cloth. Under the cloth, I have a small light and scissors and rolls of red crepe paper (like you would use to decorate the high school gym for prom). I'm cutting out hearts from the crepe paper and dropping them out of the folds of the fabric. Along the lower left of my silhouette, you can see some of the hearts accumulating there. The accumulation of the hearts was the main thing, really. 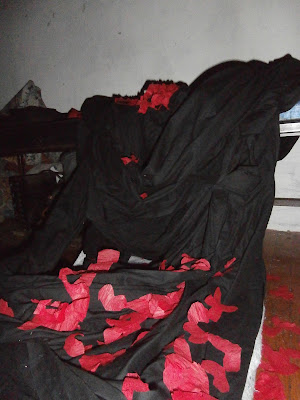 Above is a picture I took after I'd de-cloaked (as it were). you can see both red hearts and detritus from cutting them out. This photo was taken with a flash, to better show the color. It was a corner of a dark bar,

THE CONCEPT
I went through several concepts before I settled upon this one. I knew I wanted some action that was a response to current events, which are weighing heavily on my mind. From refugees abroad to hate crimes at home, I feel very much in the darkness, unable to see what I can concretely do (besides some of the things we all can do, like give money to appropriate organizations and volunteer at same). Working within the darkness, however, I feel we must be committed to love, that we can't let the darkness paralyze us (my greatest temptation) or turn us equally violent or bitter. I called the piece Even So, the full phrase being something like, "Though we are surrounded by darkness everywhere and we are understandably afraid, Even So, I will try to put love out into the world."

THE EXECUTION
When I do these sorts of performances, these quiet, slow pieces, I like being in a corner, out of the way, somewhere visible yet unobtrusive, for people to "find." In this case, I had a great spot. It was just inside the door at Notsuoh, so people would walk by as they entered and exited. People leaving should have been able to see how the hearts accumulated through the evening, even if they only saw me upon entrance and exit. The accumulation of the hearts should have been the thing.

PROBLEMS
However, it was dark. While the black cloth was appropriate for the concept, the red hearts didn't really stand out against it. Furthermore, except for times when I was making bigger movements (like rocking or adjusting my cramping legs under the fabric), I don't think everyone noticed there was anything there at all. This was brought home when people would try to store items behind me and bump into me not realizing I was a person. There was also a brief moment when another performer stored some white cloth by me, basically by just tossing it at my feet. That actually worked out in my favor as I could see out and the red hearts falling on the white fabric stood out nicely. Even so, it wasn't really part of the concept.

Cutting out hearts while shrouded was much more difficult than it should have been. I had a small light under the fabric with me so I could see---except that positioning it so I could both see what I was doing and not blind myself was a challenge. But one doesn't realize how much movement one makes when cutting out paper hearts until one's movements are restricted.

I mostly learned that I cannot sit still for extended periods of time any longer. I started out on the floor and nearly started crying from the cramps. I tried to tough it out and then decided this was a bad time, place, and reason to die of a thrombosis, and I moved myself up to a bench, where my legs could unfold a little better. However, I ended up sitting on the cloth in such a way that I couldn't not sit up. By the time it was all over, I could barely stand up, much less stand up straight. I'm sure I looked drunk as I moved about, cleaning up after myself.

THEREFORE . . .
If I try to remount this performance, I will consider a few things.

While I like the idea of the hearts being created on the spot, in the darkness, I have to consider if the effect is harmed if I have the hearts cut out in advance and simply drop them out of the folds of the fabric. I like the notion of love taking time, that it's not a facile response to the darkness. On the other hand, I could have a larger accumulation hearts surrounding my figure shrouded in black.

I should only do this piece in a place that has some lighting choices.

I should probably have an assistant to help me with the drapery if I need to adjust under it.

And I need to start out in a position that my aging, cramping body can maintain for a couple of hours. Sitting on the floor is no longer it.

IN CONCLUSION
This is one of those things that I am glad I did, even if it didn't come off quite as I might have liked. I feel like artists need to make art in reaction to current events and this feels like one piece of mine that more directly did that. In fact, I told a friend that I felt very much influenced by Yoko Ono in this piece. Love doesn't only come out of the pretty places and is most needed when coming out of the darker places. I like to think she would agree and approve.

Posted by Neil Ellis Orts at 7:07 PM No comments:

I'm writing this the evening of our last rehearsal for February to August, the ten-minute play I wrote and directed. Tomorrow evening (8:00pm, One Main Street, University of Houston-Downtown, O'Kane Theater), It will have its one run before an audience---in this iteration.
I've learned so much doing this small piece of theater. It's really the first script that I've written that I've actually gotten on the stage. (I suppose you might count the sort of sketch/vaudeville script I wrote around existing music for the Bastrop Opera House in 1986---The Grasshopper Hill State Fair and Tent Show---but just barely.) Shortly after I graduated college, I wrote a script that almost got produced and then it didn't---On Life, Living, and Being Alive (a 20-something's naive yet potentially charming comic exploration of the meaning of life, and I'm pretty sure it's okay it was never produced)----and in the early 1990s, there was a one-act play---Our Father (a drama that took place in a funeral home parlor, full of shouting and secrets between siblings), another happily unproduced script). Very low dramatic output for a writer with a BFA in theater. (Now that I mention the BFA, i did stage a scene from On LIfe for my senior recital.)

So tomorrow night is full of anticipation and dread and desire to do it all over again. I've learned some things about why it's difficult to direct your own script. I've learned some things about stage writing that I knew (or should have) but didn't quite exercise in this script. I've learned that rewriting is a great companion on the way and that there are probably really good reasons there are multiple versions of Angels in America produced, at least from Tony Kushner's point of view. 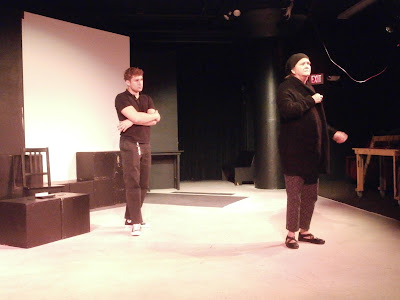 All of which was more than I intended to ramble on about tonight. Tonight, all I really wanted to write about was that the process of rehearsals and working with actors on my own script has been an education---one I may write about more after the show, but definitely one that I will work to put to use as I move to put my long one act, The City, A Desert. If for no other reason, I'm glad I produced February to August before I set seriously to work to get this longer work on its legs.

Thanks to Kay McStay (Patty) and Isak Durmic (Andrew) for giving me this education, and particularly to Dr Thomas Lyttle, who let me crash his directing class's final projects (my play will be presented with student directed one-acts) with my own project.

Posted by Neil Ellis Orts at 8:16 PM No comments: