Last night (Friday, January 18, 2013), I participated in a performance art event at Avant Garden and created/curated by CONTINUUM. They are currently in the middle of a residency at Avant Garden, with monthly performance showcases and workshops.

I attended their last workshop, wherein we were guided through exercises and eventually created "rituals" (broadly defined). I created a very brief piece that I called "The Liturgy of the Other."

That seemed to be enough to present something at this month's live art event. With little more than a week to come up with something, I revisited a piece that I had never actually completed: "Watch How You Watch (or: what do you see when you see yourself seeing?)."

"Watch How You Watch" was first presented in connection to a Fieldwork Showcase in November of 2011. It was a duet and Denise Wilborn joined me in the performance. We set it up as an installation in the lobby so that it was going on as the audience entered. It looked like this: 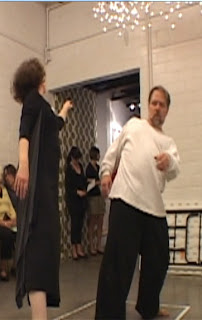 We were dressed in loose, flowing clothes, in a fully lit lobby, with only tape on the floor (with the name of the piece written on the tape) to demarcate the performance space. I had intended to hang strands of small mirror tiles from above to further demarcate our space, but ended up with time to only hang two round mirrors on either side of the square. They are pretty well invisible in this photo.

The Avant Garden, solo version of this piece looked like this:


Here, I'm in rags---a torn shirt, jaggedly cut off pants---and while you can't see it in this photo, around 50 small, round mirror tiles taped to my face and body (about 20 of which fell off during the performance). I got a few more mirrors suspended from the doorways to this small, mostly enclosed space on the second floor of Avant Garden, which the photographer placed in the foreground here. Here's another view wherein you can see some of the mirrors on me:


So, I hope these photos demonstrate that the two iterations were visually quite different. Still, I chose to call them by the same title.

At the base of the piece is the movement meditation that I have used with a couple of groups and that I try to do, however briefly before any performance. I call this meditation/practice "practicing resurrection." It's something I've come up with by stealing from a few people along the way, but I've "baptized" it with a bit of Christian story into it. Briefly, the questions underneath the meditation is, "what if my body were resurrected, awake, fully renewed? What if my presence extended beyond this physical body while maintaining its seat and being in this physical body?" In answer to these questions (and a few others I might ask along the way), I move, trying to follow the impulse of my body, in response to stimuli around me.

In the process of doing this meditation, I began wondering about the performative possibilities of it, that is, the performing it for viewers as well for participants. That it was purely improvisation, and improvisation of the most impulsive, unplanned, pretty much unstructured kind, I wasn't sure what the point was.

Then I recalled Bill T. Jones, in a post-performance talk-back, telling an audience member (and I believe he was quoting someone else, but I don't recall who) that the best way to look at modern art is to look at yourself looking at modern art. That is to say, what are your responses to the work? Are you intrigued? Why do you think that is? Are you dismissive or judgmental? Explore that. Etc.

So I decided to present this mediation, this exercise in new life and scars and eternity, as a performance, not because I thought people would "get" all that was behind the meditation, but as an attempt to start a conversation with its title. I admit this becomes something of a confrontational piece---but again, I'm not sure people will "get" that from watching.

Honestly, I don't know what people get from looking at it. I'm curious about that, but not my purpose just this moment.

Underneath all this is also my theological presupposition that we're all made in the Image of God, that the human body is intrinsically beauty, bearing the beauty of God, and the human body in motion, animated by the breath of life, is pretty close to exploring the movement of God among us.

So in the first iteration of "Watch How You Watch," I focused on beauty, of showing people that we are beautiful creatures and so I had us dressed in such a way as to enhance the beauty of the body in motion---flowing costumes that also, at time, clung to us and billowed out from us.

For the context of the CONTINUUM showing, I knew I wanted to take it in a little different direction. I hit upon the idea of putting mirrors on my body so that not only could an audience member look in the hanging mirrors to "see what they see when they see themselves seeing," but also so that my own body might reflect the viewer as well. I knew this would require baring more skin. Baring more skin would also add the layer of looking at my overweight, not magazine-cover-ideal body---asking the audience to reflect on what they see when they see themselves seeing a body that is, frankly, hairier than popular media like to admit humans can be (or if they admit to it, it's ridiculed).

To this end, I briefly toyed with the idea of simply being naked. I often joke that it's inevitable that I'll at some point be naked in a public space, but I also am not into nudity without careful consideration of it, not in a society that has a wide range of responses to nudity. In this North American culture, being naked too often becomes primarily about being naked---and this piece isn't about that.

I considered just wearing the billowy pants, going topless, as it were. This also didn't exactly sit well with me. The pants alone could evoke a martial arts practitioner. Adding a T-shirt or tank top seemed too casual. I wondered if I might find a vest somewhere quickly and cheaply.

Then I thought about rags. It was a bit of a jump from "vest" to "rags," but that was the sequence. I found a pair of slacks with a worn-out knee and a shirt with a threadbare collar, and commenced to cut and tear into them.

The result looked more castaway-cum-Doc Savage, than, say, homeless person, but it was definitely not "pretty." Asking people to look at rags while also reflecting their reactions back to them . . . well, this intrigued me. It felt like the piece now had a new level that the first version hadn't even considered. I felt very good about the evolution to this point, at least for the CONTINUUM/Avant Garden iteration of the piece.

I'd like to keep this performance in my back pocket, so to speak, have it as a piece to pull out at a moment's notice/opportunity. But this experience has opened my eyes to how I might be open to context and morph the piece according.

I think there are possibilities for this piece to continue to grow and change, both as a solo piece and as a group piece. I hope it's sooner than an a year before I revisit this piece.

(To that end, I should say that if you might want "Watch How You Watch" as part of some event---I can see it as a pre-show/lobby presentation before a theatrical event or as a durational piece going on during a party or other gathering---please feel free to contact me at neilellisorts (at) yahoo (dot) com. That goes equally if you have a workshop or retreat that might benefit from an hour or so of "Practicing Resurrection.")