ShadowPlace
a performance installation
March 3, 10, & 17, 7:00pm.
The Photobooth on Montrose (on the corner of Westheimer and Montrose)

I'm writing this short over the noon hour on a Saturday. I'm getting things ready for tonight's rehearsal---yes we're rehearsing on a Saturday evening because this group of performers is just that busy. It's a little shocking that they're not performing tonight. I guess I caught them between gigs.

Breath & Bone will be a loose affiliation of creative people who will be artists in their own right, be affiliated with other performance companies, or have their own companies; artists will therefore be variously committed to Breath & Bone, according to the current project in production. Artists who wish to affiliate primarily with Breath & Bone will be encouraged to seek out other opportunities as well. In this way, we are all trained and cross-trained by the whole Houston arts community.

This group of artists exemplifies this ethos to a large extent. Michael Simmonds lists himself as an artist and musician---and he's the participant I know the least about but hope to find out more after we complete this project. We have several dancers and choreographers with Cassandra Shaffer-Permenter, Donna Meadows (both worked with me on Jill Alexander Essbaum's Necropolis during my HopeWerks Residency), and Laura Gutierrez. Shanon Adams is all over the place lately, in dance, performance art, and theater circles (a woman after my own heart, really). Ashley Horn directed me in her dance film Wanderland and and now she's performing as well as making costume pieces for me on ShadowPlace. She's another one of those multi-disciplinary people to whom I gravitate: dancer, choreographer, filmmaker, costumer . . . and she was just this week featured in the Houston Press's 100 Creatives feature. And finally, a big part of ShadowPlace are these rather big fabric screens, which are being made by fiber artist Sari Frey (who has also had a long career in the Houston Grand Opera's chorus).

I hope in our collaboration we all learn from each other and take a little bit of each other to our next project. That's how artmaking is transmitted, it seems to me.

This is going to be beautiful. I hope you'll join us for it.
Posted by Neil Ellis Orts at 11:10 AM No comments:

ShadowPlace
a performance installation
March 3, 10, & 17, 7:00pm.
The Photobooth on Montrose (on the corner of Westheimer and Montrose)


Every idea starts somewhere. ShadowPlace started over two years ago.


I first started imagining a performance installation with large pieces of fabric and light and shadow almost 3 years ago. The church to which I belonged at the time had a worship space with movable seating, something that I wanted to play with. I pictured these screens with people holding candles in the darkened nave, their shadows thrown on fabric that was translucent enough for the shadow to be seen on the other side. Two people would walk around the screens, catching glimpses of the other shadows, but not seeing "face to face," to use a Pauline phrase. In this initial idea, the fabric was stationary. I imagined this to take place before the Wednesday night lenten services, as something that was simply going on as people gathered for the prayer service. Each week, I'd arrange the nave's seating differently, the screens in different configurations.


When I proposed this to the worship committee, it was decided it was a bad time for it, or it was deemed too unusual---both comments were made, so I'm not sure which it was precisely, maybe both. But at any rate, it didn't get performed in that space.


But the idea stayed in my head. And grew. I started seeing the screens move as well as the people with the candles. I started looking for other sites where this might be performed.

The Photobooth on Montrose has emerged, in the last year or more, as a place for the small art event. I eventually approached Simon Gentry, the photographer and proprietor of the Photobooth, about doing it there. He seemed excited about the meditative nature of the piece.

In translating it from a sacred space to a secular space---really a business space---opened up some possibilities for me. I felt less constrained to think it through too much, I was free to let the piece present its own meaning rather than my putting meaning on it. In short, I'm allowing this piece about being in an ambiguous place to have its own ambiguity.

I hope you can come see it, watch it for at least 10 minutes---it's a come-and-go affair, by the way---and then tell me what you see in it.

I might mention, briefly, that we are not using candles. I love candles, I think they throw amazing shadows. I also think open flame next to light fabric is a bad combination.

Last summer, as I was working at one of my occasional gigs as a dance writer at a NobleMotion Dance concert, I saw a section of dance that found all the dancers holding these small lights---which threw awesome shadows!

"THOSE!" I thought loudly in my brain, "I NEED THOSE!"

So a week or two later, I contacted the lighting deisgner, David J Deveau, and found out what THOSE! were.

It's all about paying attention to what's around you . . .

Posted by Neil Ellis Orts at 7:48 PM No comments:

First of all, if you're in Houston, take note of these dates:

For one hour, for three consecutive Sundays, Breath & Bone/Orts Performance will be in the Photobooth, moving large screens of fabric and carrying lights, offering a meditative performance installation. The theme is watching, waiting, keeping vigil, hoping . . .  the medium is light, shadow, and fabric. It's going to be a quiet hour. And beautiful.

We're also running a small fundraising campaign so the performers all get a little pocket money for their time, talent, and skill. We're using Indiegogo. If you can spare as little as $10, it'll go a long way to helping us bring this contemplative hour to a busy corner of the Montrose neighborhood. Go here to contribute.

Over the next few days, I'll be sharing the history of this project (I've been wanting to do it for at least two years) and telling you about the great collaborators. For now, I hope you'll put it on your calendar, maybe go like our Facebook page and visit the Facebook event page. 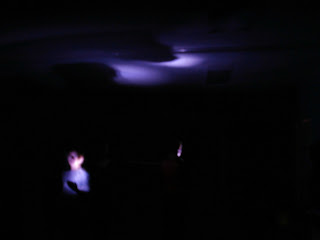 Posted by Neil Ellis Orts at 7:50 PM No comments: