Looking Back and Forward

It's been a while since I've posted to this blog, and there are reasons for that, none of them really all that great. It is true that I've been working more on writing in recent months. Also, most everything I've attempted with performance has fallen apart.

I will be making more performance this coming spring, via Fieldwork starting March 9. I'm facilitating again this spring. Follow the link to get more information and to register!

As I am preparing for Fieldwork, however, I've been looking back over what performance I've made over the last two years, since creating Breath & Bone. I've been very pleased, over all, with what has been created.

I've also been disappointed by the things that didn't come to fruition, for one reason or another. Most recently, I'm disappointed by the non-realization of the advent art event I tried to get together. I have some hope of getting that together, maybe for next year. I was also hopeful of participating in a recent event by Continuum, the local performance art collective. Again, fell through.

And planning two things in a row that I couldn't make happen has been discouraging. Meanwhile, some writing is happening and I finally made a conscious effort to concentrate on that and not attempt performance for a few months.

Still, it's not as if I suddenly lost the will to make performance. Performance has just taken a brief backseat.

Here's the thing about performance: It's expensive, and requires the ability to schlepp around props and other performance accessories. I live without a car, and the last two years have resulted in medical bills that has postponed some hopes.

Not complaining, just telling. All of this is still all a gift I'm amazed to have received. 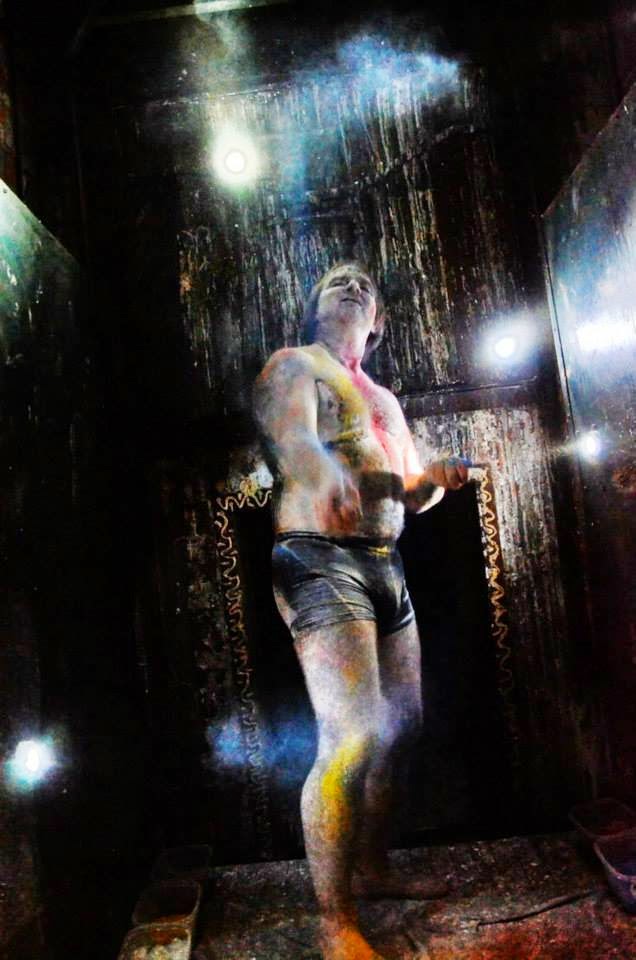 So, what next? Well, that's a little hard to say, except that I want to explore some options. I still have this dream of an arts organization that produces work and also engages the work theologically. Not even the work itself, but the process of making art. The phrase I keep coming back to is art making as a site for theological reflection.

I feel I've established something of a track record as a performance maker (not everything is documented in these photos, by the way) but most are still pieces that have remained seen by few or not quite the audience that I've been hoping to cater to. This brings us back to the need for an actual organization, a board or even some very committed friends to help with things like publicity. I've been trying too long to do this alone. I don't know who these helpers might be, but I need to start asking folks. And if you're reading this and this somehow touches a nerve with you and you want to volunteer, well, there's a comment section below or you can email me at neilellisorts at yahoo dot com.

Looking back over, not only the last two years as Breath & Bone, but also over the decade that I've been in Houston, I've made a lot of things happen. I've published some very good books as neoNuma Arts. They're still available on Amazon here, here, here, and here.

I've a decent resume as a part-time arts and religion writer.

I've published some creative writing the last couple of years, too, most notably my novella, Cary and John.

All of this, I might add, around always working a full time job of some sort.

And it's all been satisfying, it's all been a marvel to be a part of each project. In so many ways, this is crazy territory for a farm boy from Paige, Texas.

But there's room for more.

I'm past ready for more.

I wish I could say what that meant in concrete terms, but again, as above, contact me if you have ideas . . .

Immediately, it means making a piece for Fieldwork---as a starting point, I'm going to revisit this essay and expand.

I have written a draft of a long one-act play based upon the sayings of the Desert Fathers and Mothers. I mean to have a reading of that for select friends and colleagues by summer. Won't be produced anytime soon, but a reading is the next step in its development.


And after that . . . so many ideas, most of then never to be realized. But there will be an after that. Maybe that's what is most important.

Well, the most important thing is a setting up a means for making it actually happen. No more false starts . . .

Stay tuned and keep in touch.


Posted by Neil Ellis Orts at 9:25 PM No comments: